Napo in the community - supporting the campaign against Hate Crime 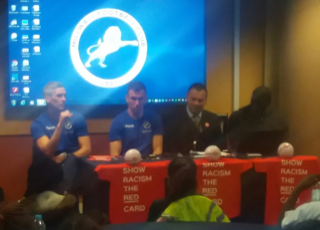 90 young people from schools in Bermondsey took part in an educational opportunity focusing on the identification of hate crime and how it can be reported and opposed. The event was one of a series that have been held at a number of professional football clubs in England, Scotland and Wales.

The event at Millwall included tutorials, workshops and plenary sessions as well as a tour of the ground and also saw the launch of the new SRTRC campaign video sponsored by a number of trade unions. This features a wide range of leading male and female footballers as well as community campaigners who explain their work and who have put together a very powerful collective message against hate crime.

The afternoon was rounded off by a lively question and answer session where Ian joined a panel which included Millwall players Steve Morrison and Jed Wallace who fielded questions from the young and highly knowledgeable audience.