That track by the legendary rock band Queen as in: ‘another one bites the dust’ is especially apposite in terms of this week’s announcement of a new Secretary of State for Justice. The cabinet shuffle, or shambles depending on your point of view, saw the elevation of David Gauke to replace David Lidington and take possession of what some might say is one of the two great ‘poisoned chalices’ (the other being Work and Pensions), becoming the fifth incumbent over a four year period.

Owing to unforeseen travel and communications problems between both of us yesterday it was not possible to fulfil the scheduled introductory telephone call with the SoS. If or when that happens, my shortlist will include the current operational state of the probation service, the number of alarmingly critical HMI Probation reports and our agenda for improving the situation, the need for a properly joined up prison and probation service with rehabilitation at its core, and why Napo members need a significant pay rise and soon.

The Minister certainly got off to a quick start in his new role with what the experts are telling me was a thoughtfully measured statement on the back of the ‘Worboys’ parole case that broke last weekend.

Transparency of the Parole Board and victim support

We also say goodbye to Under Secretary Sam Gyimah, who heads off to become Minister for Higher Education, suggesting that we will see him surface prominently elsewhere in the not too distant future.

Lucy Frazer, a barrister by background and former PPS to David Lidington, comes in to join the team and I equally look forward to meeting with her, and we see the appointment of a new Minister in the form of Rory Stewart, the author of a book chronicling his 6000 mile trek across the Middle East and Asia.

Profiles of the Justice team:

Announcement on Domestic Violence suggests someone is listening

The very welcome Parliamentary statement this week says that from 8 January 2018, changes to evidence requirements in private family law disputes have come into effect. There will no longer be a time limit on abuse evidence, which previously stood at five years.

This will be welcome news to the direct victims of domestic violence who will get more support in taking abusive former partners to court. Additionally, the range of documents accepted as evidence of abuse has been widened to include statements from domestic violence support organisations and housing support officers.

The statement from the outgoing Minister David Raab who has received a promotion to Housing, said: ‘Legal aid is available to people involved in private family disputes if they are victims, or are at risk of becoming victims, of domestic violence or child abuse. To qualify, applicants must provide objective evidence of the abuse while their case is also subject to means and merits tests.

These changes follow the review of the evidence requirements set out in the Legal Aid, Sentencing and Punishment of Offenders Act (LASPO) 2012.

Given the contents of my last posting these would appear to be progressive reforms in favour of supporting victims of domestic violence, and go hand in hand with a commitment to strengthening the Domestic Violence and Abuse Bill. Let’s hope these latest promises turn that into legislation (with some real teeth) in the future.

A victory for MAPPA Administrators

Our thanks go to the group of Napo members who assisted in drafting the appeals and attended consultation meetings with the NPS prior to the actual appeal panel meeting. The response from our MAPPA Administrator members to this result has been very positive. Thanks to all of you who have been in touch with us for your kind words which are a credit to everyone involved in the process.

The appeals are final; however there is a commitment to reviewing the new job descriptions over the six months following implementation to ensure that the actual role does not differ significantly from the job description and JDQ. Napo will continue to work with any members employed in these roles to review the situation.

Each NPS division will now have an implementation plan and you will be issued with your new job description formally during your E3 1:1 meeting. This is the point at which your pay changes.

If you were previously paid at a higher grade you will have 3 years pay protection as per the national agreements secured by the unions. At your 1:1 meeting you should discuss with your manager any concerns that you have and you can ask to be matched to another role if your job description has more than 70% correlation to the role that you are asking to be matched to. If you are moving to pay protection you can request support from the employer to move to another role at your previous grade during the three years of pay protection. This might include training and development opportunities.

Please contact your local Napo rep if you need support with this process.

We recognise that there will be some members who will be disappointed by the outcome. We are as sure as we can be that the process has been followed properly but it has become clear that the job evaluation system is now out of date. There is a Union Rep on the panel (including the appeal panel) and our appreciation is extended to these members for carrying out a difficult role. It is important to understand that the role of the Union rep on the panel is not to represent the members who do the job that is being evaluated, but to ensure that the process is followed fairly. We continue to make representations separately around reform of the Probation pay system and that once we know the outcome any review should also include taking a fresh look at the existing job evaluation system.

It’s not unusual in and outside of my job to have to challenge the old adage that: Parliament is a waste of time. I would rather qualify this sentiment by saying that a minority of its incumbent MP’s are a waste of space, but don’t ask me to name names here tempting though that obviously is.

Far more important are the facts that prove how campaigning with committed members of the House can influence change as seen by the above report on a huge Family Justice issue which Family Court Section members in particular have been awaiting for some time, and the link to the work of the Justice Unions Parliamentary Group of which Napo is a very active member.

Similarly, in respect of our ongoing campaign to see Probation services restored to public ownership, the report from Union Services gives a transparent account of some decent work that has followed from the partnership with Napo and how this has impacted on the policies of the official opposition and the current Justice Select Committee inquiry into TR.

As I said at the last AGM and don’t remind repeating again, we will use every method possible in promoting and protecting the interests of all our members wherever you work and this route is a highly productive one.

Napo gears up for major TUC demonstration in London 12th May

‘A new deal for working people’ will be the theme of a major TUC demonstration in Central London on 12th May as part of Great Jobs campaign which was launched at the 2017 Congress.

The TUC have advised me that it wants to organise an inclusive, family friendly non-sectarian event with the usual march and rally with a number of speakers reflecting the diversity of the trade union movement.

Napo, in concert with other unions has been asked to draw up a mobilisation plan and to send a representative to the planning group in order that a big turnout can be secured on the day.

Ranjit Singh rsingh@napo.org.uk will be sending out further details of the event and travel arrangements later into January but meanwhile please keep a note of the date.

One Demo which is not happening as Donald Ducks

I remember also saying at the last Napo AGM that we do not want racist misogynists like Donald Trump coming to our shores and my morning was made much brighter by the news that he will not after all be opening the new American Embassy and has ditched the plans for his controversial visit next month.

There will be a few people who will lament the chance to take part in one of the biggest demos the world (or certainly South London) has ever seen, but others who will cheer the fact that we don’t have to spend mega millions of taxpayers hard earned protecting him from his  legions of adoring British fans.

Napo Calendar coming to an office to you soon

It's been a while since we have been able to produce Napo wall calendars, but our good friends at CSPA have made it possible for us this year! copies will be distributed by branches in the coming days, but feel free to contact kfalcon@napo.org.uk or tburke@napo.org.uk if you would like to receive more 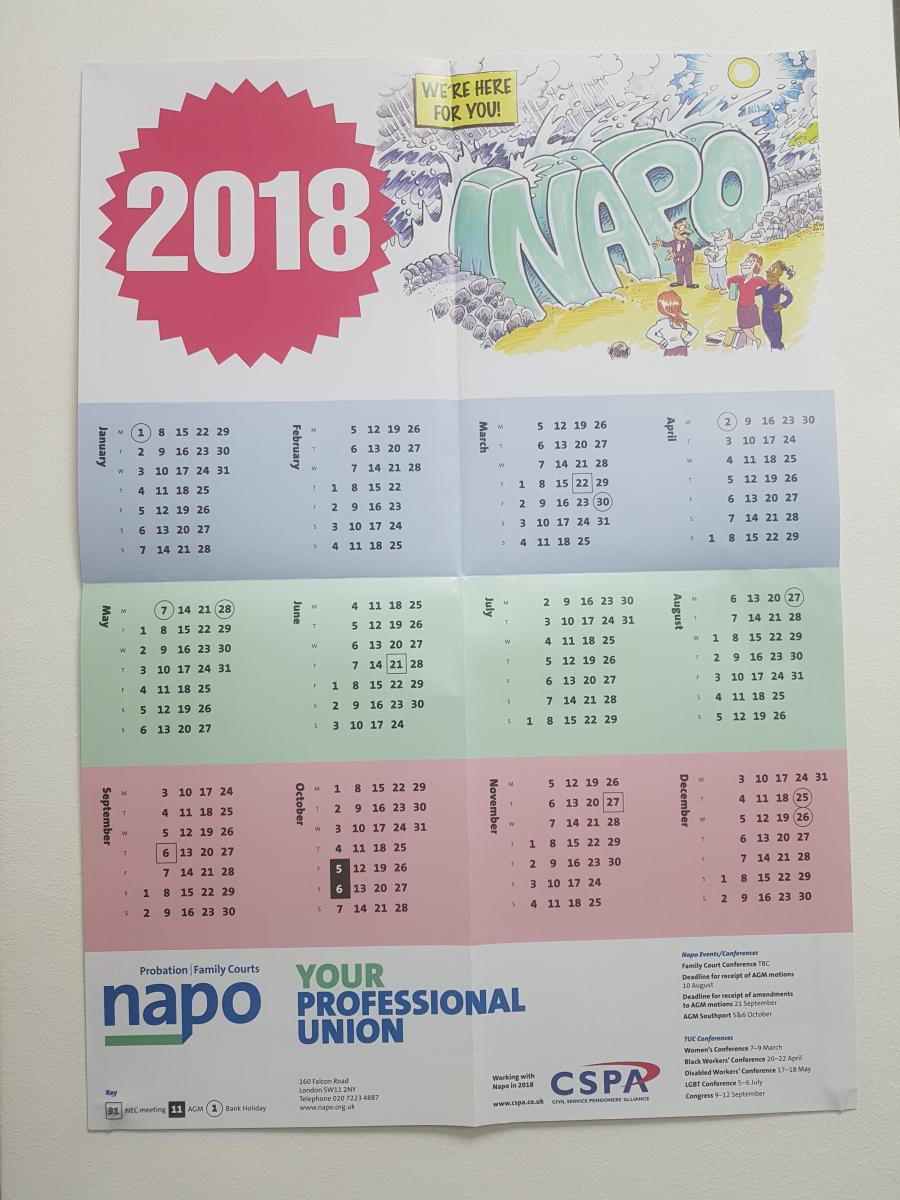